The Invitation, The City and the River 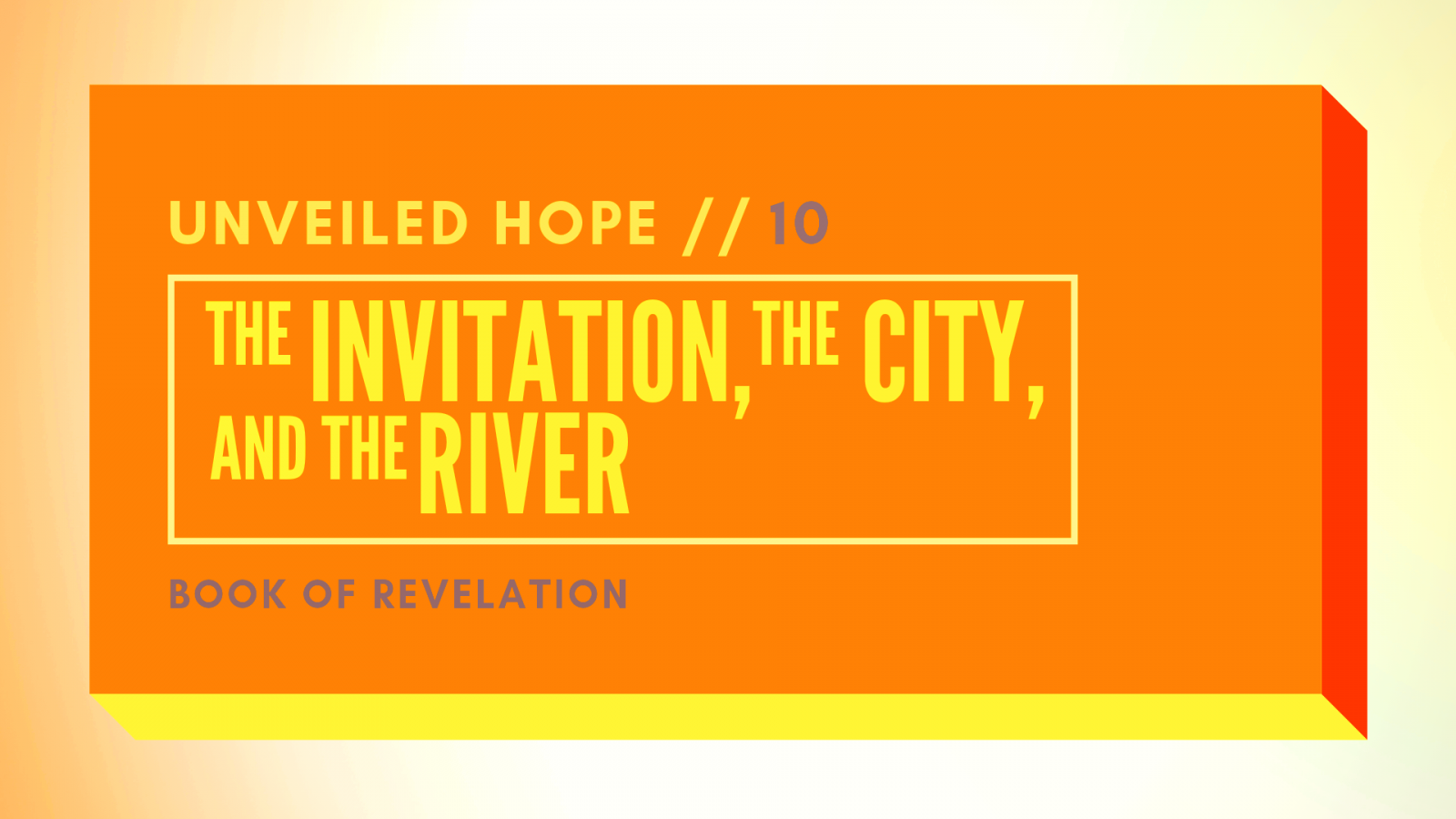 We come to the last instalment of our teaching on the book of Revelation. It concludes with a vision of perfect love and union with God with a whole bunch of people. Through symbolic pictures it seeks to capture the wonder for which all our hearts long. A life of people together, with no sorrow, no pain, no injustice, no evil, no darkness and the love and Glory of God at its centre. It is a new heaven and a new earth redeemed by the blood of Jesus where everyone is welcome. However, it is an invitation to be received. We may we refuse the invitation, but in doing so we reject love and life for eternity.

1 Then I saw ‘a new heaven and a new earth,’ for the first heaven and the first earth had passed away, and there was no longer any sea. 2 I saw the Holy City, the new Jerusalem, coming down out of heaven from God, prepared as a bride beautifully dressed for her husband. 3 And I heard a loud voice from the throne saying, ‘Look! God’s dwelling-place is now among the people, and he will dwell with them. They will be his people, and God himself will be with them and be their God. 4 “He will wipe every tear from their eyes. There will be no more death” or mourning or crying or pain, for the old order of things has passed away.’

5 He who was seated on the throne said, ‘I am making everything new!’ Then he said, ‘Write this down, for these words are trustworthy and true.’

6 He said to me: ‘It is done. I am the Alpha and the Omega, the Beginning and the End. To the thirsty I will give water without cost from the spring of the water of life. 7 Those who are victorious will inherit all this, and I will be their God and they will be my children. 8 But the cowardly, the unbelieving, the vile, the murderers, the sexually immoral, those who practise magic arts, the idolaters and all liars – they will be consigned to the fiery lake of burning sulphur. This is the second death.’

9 One of the seven angels who had the seven bowls full of the seven last plagues came and said to me, ‘Come, I will show you the bride, the wife of the Lamb.’ 10 And he carried me away in the Spirit to a mountain great and high, and showed me the Holy City, Jerusalem, coming down out of heaven from God. 11 It shone with the glory of God, and its brilliance was like that of a very precious jewel, like a jasper, clear as crystal. 12 It had a great, high wall with twelve gates, and with twelve angels at the gates. On the gates were written the names of the twelve tribes of Israel. 13 There were three gates on the east, three on the north, three on the south and three on the west. 14 The wall of the city had twelve foundations, and on them were the names of the twelve apostles of the Lamb.

1 Then the angel showed me the river of the water of life, as clear as crystal, flowing from the throne of God and of the Lamb 2 down the middle of the great street of the city. On each side of the river stood the tree of life, bearing twelve crops of fruit, yielding its fruit every month. And the leaves of the tree are for the healing of the nations. 3 No longer will there be any curse. The throne of God and of the Lamb will be in the city, and his servants will serve him. 4 They will see his face, and his name will be on their foreheads. 5 There will be no more night. They will not need the light of a lamp or the light of the sun, for the Lord God will give them light. And they will reign for ever and ever.

6 The angel said to me, ‘These words are trustworthy and true. The Lord, the God who inspires the prophets, sent his angel to show his servants the things that must soon take place.’

7 ‘Look, I am coming soon! Blessed is the one who keeps the words of the prophecy written in this scroll.’

Living in the Millenium

Revelation 20 is one of the hardest passages of the Bible to understand. But it also one of the most encouraging when understood correctly. It contains what is called the millennium, and also the final conflict, the lake of fire, and the last judgement. From the present reign of Christ to the time when God will be ‘all in all’ it is good for us to have a revelation of what’s what now, and what will be at the end.

The supper of the lamb and the defeat of evil

Revelation 19 shows us two contrasting suppers. One is the marriage feast of Jesus and his followers at the end of time. Its an empowering vision and hope for us. It is a time promised to the world, when sin, grief and evil is finally ended and we are united face to face with God as his beloved bride. All our hopes for justice, peace and love come to realisation in this marvellous supper. But there is another supper in this chapter. A supper that symbolises the destruction of all who defy the kingly authority of Jesus, the Lamb of God.

We are invited to the marriage supper of the Lamb. Let make sure we’ve got our wedding clothes on.

The fall of Babylon

Revelation is a book of hope. It’s a word from God to his church to remain faithful, seek wisdom and patiently endure the trials that Christians will face living in the world. The hope that we have is that Jesus has come to us, saved us, and He will secure us in the storms of life for God’s ultimate purpose. Some of these storms will come in the form of other people and worldly systems who do not know the love of God and God’s kingly authority in all things. They will seek to humiliate and marginalise people of faith but this shouldn’t come as a surprise. Neither should Jesus’ ultimate victory. God has a plan and he is at work in the world for good. So let our Hallelujahs resound. Jesus is Lord.

Jesus speaks tenderly and boldly to us. He loves us where we are and yet calls us out of ourselves in triumphant suffering love. In John’s Gospel Jesus said “In the world you will have trouble and suffering but take heart, I have overcome the world”. If Jesus has overcome then He calls his church to overcome the world through trust and obedience to him. It is important that our hearts are encouraged because Jesus also reveals the evil spiritual influences behind our trouble and suffering in the book of Revelation. Being forewarned is forearmed. Jesus is Lord, our protector and our commander in the battle of life.

In “The Screwtape Letters” C.S.Lewis wrote “there are two equal and opposite errors into which our race can fall about the devils. One is to disbelieve in their existence. The other is to believe, and to feel an excessive and unhealthy interest in them”. Being a Christian, knowing the love of God and living by the love and power of Jesus is an wonderful life, but not a life without opposition. Revelation unveils the battle for every Christian. Its a battle against Satan and the demonic forces of evil. Yes, we don’t often speak like that, but unless we name the reality we are deceived and unarmed. But in Christ we have the authority, the power and the joy to stand and we are not unaware of the devils scheme.

There is a reason why the book of Revelation is the last book of the Bible. Revelation completes the glorious storyline of the Bible and seals the history of the world with hope. When we are faced with persecution, sickness, turmoil and chaos Revelation reminds us that all things are in the merciful hands of our Father in heaven whose heart is filled with love for all He has made. It’s a love we can experience and rely upon today. But it also presents us with a choice. To whom will we align our hopes, and what will that look like in our day to day choices?

History is drawing to its conclusion in God’s victory, and we need the long view of life to secure our hearts and be a people focused on Jesus.

It all ends with worship

When I watch a movie I don’t want to know how it ends before I’ve seen it. However, I sometimes think how different the characters’ lives would be if they knew how their story ended. What struggles could they have avoided? The book of Revelation contains the greatest ‘spoiler’ in history but far from spoiling the journey, the vision of God reigning and the creation bowing down in worship gives us confidence to take risks and live a godly, abundant life. At the end of time, as Revelation shows us, all enemies of life are defeated, and Jesus the Lamb of God will be seen as the worthy center of all our worship. We too will bow down to God in utter amazement at His Love for us. In this case it is good to know how our story ends.

So… Spoiler Alert: It all ends with worship.

The Son of God speaks

The Bible shows us that God has a plan of salvation for the whole world and that believers who know Him have a key part to play in the outworking of that plan. This is an amazing grace and mystery. The book of Revelation reminds us that while we live in this world we do not live independently from the God who loves us, who speaks to us and commands how we live. Perhaps the most important question we can ask ourselves today is “what is the Spirit saying to the church?”

Revelation gives us an insight into that very question.

Today we begin a new series on the book of Revelation.

The Book of Revelation is a book of hope to a church suffering under the persecution of Rome. The exclusive worship of Jesus as the risen and reigning Lord was the ultimate threat to Rome’s authority. It is a timely book of great encouragement to us as well. Revelation reveals Jesus in the hidden realities of our life. In Revelation we discover we are not alone, that God reigns and deals with evil and we can and must remain faithful and hopeful in Jesus.

Come with us as we unveil the presence of Jesus, alive and reigning in our day.