A tale of two women 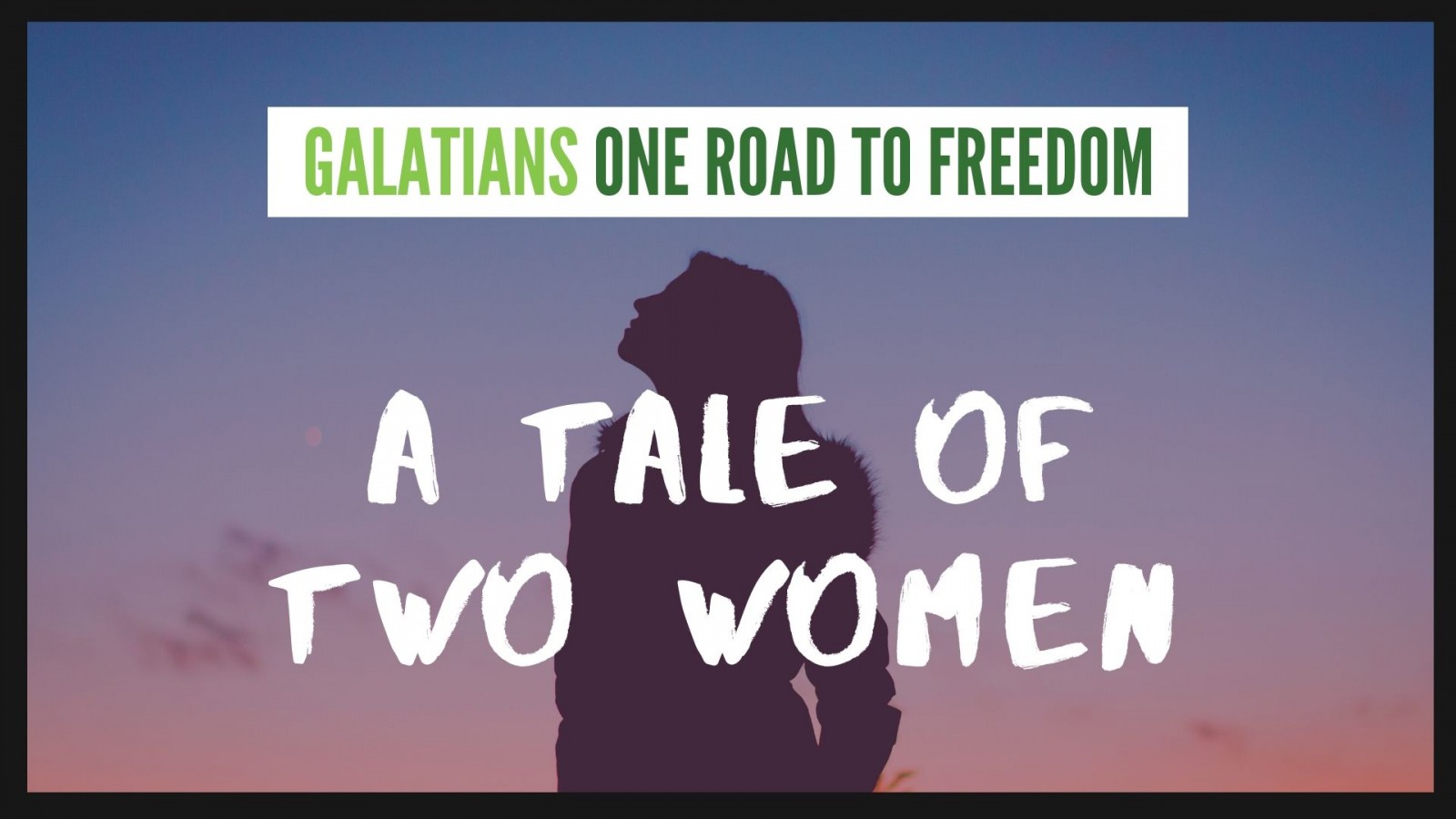 The whole history of the people of God is full of the miracle of God’s promise of a son to Abraham. It’s the miracle of the new covenant of God’s grace, in contrast to the old covenant based on human effort to fulfill the law. We need to interpret what Paul is saying to the Christians in Galatia in the first century AD, not only in the light of our personal lives as ‘children of promise’, as we heard last week, but also in the light of today’s cultural landscape. Because we are now free in Christ, we are free to think and speak with a clear gospel voice. We are free to speak out boldly against the often outrageous diktats of today’s cultural ‘Judaizers’, who insist that we align ourselves with their progressive ideological agendas.

Now Sarai, Abram’s wife, had borne him no children. But she had an Egyptian slave named Hagar; 2 so she said to Abram, ‘The Lord has kept me from having children. Go, sleep with my slave; perhaps I can build a family through her.’

Abram agreed to what Sarai said. 3 So after Abram had been living in Canaan ten years, Sarai his wife took her Egyptian slave Hagar and gave her to her husband to be his wife. 4 He slept with Hagar, and she conceived.

When she knew she was pregnant, she began to despise her mistress. 5 Then Sarai said to Abram, ‘You are responsible for the wrong I am suffering. I put my slave in your arms, and now that she knows she is pregnant, she despises me. May the Lord judge between you and me.’

6 ‘Your slave is in your hands,’ Abram said. ‘Do with her whatever you think best.’ Then Sarai ill-treated Hagar; so she fled from her.

7 The angel of the Lord found Hagar near a spring in the desert; it was the spring that is beside the road to Shur. 8 And he said, ‘Hagar, slave of Sarai, where have you come from, and where are you going?’

‘I’m running away from my mistress Sarai,’ she answered.

9 Then the angel of the Lord told her, ‘Go back to your mistress and submit to her.’ 10 The angel added, ‘I will increase your descendants so much that they will be too numerous to count.’

24 These things are being taken figuratively: the women represent two covenants. One covenant is from Mount Sinai and bears children who are to be slaves: this is Hagar. 25 Now Hagar stands for Mount Sinai in Arabia and corresponds to the present city of Jerusalem, because she is in slavery with her children. 26 But the Jerusalem that is above is free, and she is our mother. 27 For it is written:

you who never bore a child;

break forth and cry aloud,

you who were never in labour;

because more are the children of the desolate woman

than of her who has a husband.’

1 It is for freedom that Christ has set us free. Stand firm, then, and do not let yourselves be burdened again by a yoke of slavery.

More from 'One road to freedom'

The joy of new creation

Isaiah prophesied that a Son of God would come and his government and peace would not end. At Christmas we remember that prophecy is fulfilled in Jesus; the babe in the manger who died on the cross, rose from the dead, was exalted to God’s glory and who now lives in the church through the Spirit. His life of joy is embedded in deep confidence in God’s goodness, humility in the Spirit and deep love for the world. How do we know that? We see it in those who walk by the Spirit and who boast in his cross. Through them the Spirit cries out, join in the dance, there is enough joy for everyone.

Keep in step with the Spirit

All of us from time to time question our faith. Some even take the step of exploring other ways of living thinking there is freedom outside the freedom of Christ. In a life where suffering and temptation is real how important it is for us to keep in step with the Spirit. The fruit of the Spirit is love, joy, peace, forbearance, kindness, goodness, faithfulness, gentleness and self-control. Against such things there is no law.

Life by the Spirit, Freedom to love

Freedom is both a gift we have in Christ and a promise that we will receive. It’s what the gospel of Jesus promises the church. It is a promise and hope that we need to embrace by faith as well as a living reality in us. But this freedom is not a freedom to do whatever our selfish whims determine. No, true freedom is the freedom to love and the serve. In Christ we become an answer to the Lord’s own prayer "Your Kingdom come on earth”. So, are you free?

Children of the Promise

Slavery or Freedom. Which would you choose?

The Galatians, like us, knew the freedom of being Children of God, however they were being pulled back into a slavery to the Law that would bind them. Paul’s charge to them, as it is to us, is not to be fooled. Through his death on the cross, Jesus has won for us not just freedom from sin, but adoption into his very own family.

We are Children of the Promise.

Law-what is it good for?

If Jesus has made us right with God, and our inner freedom and relationship with God is no longer based upon our own obedience to God’s commands, but faith in Jesus, then what is the purpose of God’s commands now?

What is obedience to God and what part does His law play in the life of people? The law is still important for us but maybe not the way we might normally think. Law, what is it good for? Absolutely something.

The great gift of salvation is communion with God. We don’t just get our sins forgiven in Christ but we also have been brought into face to face relationship and have our lives reoriented towards His will and purposes by His powerful Spirit. It’s all grace and it is wonderful.

It seems crazy then that so much of our lives are lived in anxiety and fear. It’s good to be reoriented each time we slow down and listen to Jesus. We don’t need to be our own saviours. Jesus is Lord.

Acting in line with the gospel

The gospel is that Jesus, the Son of God was sent to us by God to stand in our place to be our savior and now to stand as our leader and our life. The gospel, is Jesus plus nothing equals everything. He is love and He holds us. If you have been at Coro for a while you will have heard this. It is the gospel we preach. However how easy it is for us to act according to a different ‘gospel’. One that says at the end of the day is really is up to me securing my own life. If I have my way, if I manipulate things the way I want then life will be good. We all do it. Even Peter, the leader of the early Church did this and was called out by Paul in his hypocrisy. There is one antidote to this says Paul. Go back to the good news. Be a people focused on Jesus.

Paul is keen to establish his credentials as an apostle and he describes his conversion in clear terms. As a hater of Christians and the Christian gospel, he encounters Christ, the one whose people he is chasing and persecuting, and this effects an amazing transformation. He is transformed from being a deeply religious person to someone who devotes his life to the spread of the gospel to all parts of the known world. This transformation is not unique to Paul, but is basis for true life and freedom for all humanity.

One road to freedom part 1

Paul’s letter to the churches in the region of Galatia (in modern day Turkey) opens with a grave concern that the believers are abandoning the true gospel to instead adopt a counterfeit. His language is strong and stark, showing us how serious an error this would be. Although we are thousands of miles away and live thousands of years later, the risk is real for us too. We must be sure that we embrace and hold the genuine message of Jesus in the face of so many alternatives that sound plausible.